Deep POV: What it is, and Why It’s a Game-Changer!

I have an embarrassing confession: I wasn’t aware of ‘POV’ as a writer until five years ago. Yet, it’s kind of a ‘Writing 101’ technique all authors need to know – and master – before writing a novel.

My first writing class made me (painfully) aware of my horrible “POV switching” when writing the first draft of Beneath the Surface. Once you’re aware of POV, you will always be aware of it, in everything you read. (Try reading a Danielle Steel novel – she’s all over the place when it comes to switching POVs!) 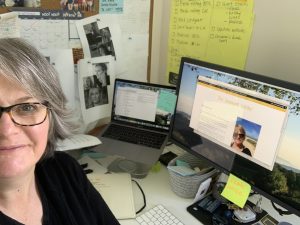 What is POV? And what’s POV-switching?

POV is short for Point of View. It’s the narrator’s perspective in how the story is told.

In first person, the story is narrated directly by the character (using ‘I’, ‘me’, and ‘my’ as the point of view).

Using second person, which is fairly uncommon, the story is being narrated using ‘you’. It’s rarely used because it’s super hard to pull off.

In third person, using ‘he’, ‘she’, ‘they’, the lens is filtered for the reader through a single character at a time.

Writing from multiple points of view is tricky when first starting out. This is when POV-switching can get in the way. POV-switching is when the author flips from one character’s point of view to another, either either mid-chapter, mid-paragraph, and sometimes even mid-sentence. Another way of thinking of ‘POV switching’ is ‘head-hopping’ when the story jumps from one character’s head to another. Readers get confused and frustrated about who is currently talking or telling the story.

You can have multiple POVs in a chapter, but they need to be separated by creating an extended return, so the reader knows something is changing.

Let me give you some examples, using Camino Wandering as a reference:

First person: I had the idea of walking eight hundred kilometres across Spain, so I could forget my past.

Second person: You’re walk eight hundred kilometres across Spain to forget the past. You put one foot in front of the other and just ‘be’ for a while.

Third person: Aubrey knew walking eight hundred kilometres across Spain would help her forget the past.

(New Chapter/section) Pam was excited by the prospect of finally walking the Camino de Santiago. It was just what she needed in her life.

(New Chapter/section). Georgina needed to sort out her life, so walking across Spain sounded like the ticket to do just that.

When I first drafted ‘Camino Wandering, I wrote from three points of view: Aubrey, Pam, and Georgina. They all had a story to tell. But I quickly realised the reader would be throwing the book across the room by the fourth chapter – if not sooner. Even I was bored by how it was coming along. How many times do you need to read how anxious people are with the prospect of walking eight hundred kilometres across Spain? After writing about ten chapters into the draft, switching POVs in each chapter, then trying separate chapters for POV, I went back and started again. I wrote the final novel from Aubrey’s point of view, in third person.

The tricky part of writing Camino Wandering was to not bring Pam or Georgina’s thoughts into the story. It all had to come from Aubrey, either by discovering it for herself, or bringing it to light through dialogue. The challenge was to figure out how to weave the storylines, but all from Aubrey’s perspective. I found myself slipping a few times, only to pull myself back and work out how I could reveal something without it being from another character’s point of view. (Now wouldn’t Camino Wandering be interesting from Pam’s point of view?! But I digress…)

Deep POV – Why It’s a Game-Changer.

Most popular fiction these days is written in the third person. Good fiction employs the Deep POV concept. But what does ‘Deeper POV’ mean?

Let me start with this: Third person POV can be either subjective or objective. Deep POV is subjective.

Objective POV is when you are witnessing something. You are watching what’s happening. You can see and hear the characters, but you have no idea what they are thinking or feeling. The reader can only assume based on mannerisms or actions. For example, when you see ‘she wondered’ or ‘she felt’ in a book– those are objective POVs.

Let me give you an example of objective POV:

Aubrey lay on the bed and felt her heart pounding out of her chest. She wondered if this was what anxiety felt like. She worried about who would help her if she injured herself.

Subjective POV (or deep POV) is when you are in the character’s head. You know everything they know, feel, see, and understand. The author conveys that in the storyline. Subjective POVs is when you strip out all of the ‘felt’, ‘saw’, ‘thought’, ‘watched’ and ‘wondered’ when writing your story.

Now an example for subjective (or deep POV):

Aubrey lay, heart pounding and suffering from an anxiety level she’d never experienced before. What the hell was she thinking? Did she honestly believe she could walk the entire length of northern Spain? What if she injured herself? Who would help her?

See how stronger that makes the sentence and, ultimately, the story? You are there, with Aubrey. You are connected with her. You feel her pain. You can understand her emotions. You’re not just sitting back and watching from the sidelines. As many reviewers have said of Camino Wandering, they feel like they’re walking the Camino along with the Lovelies. This is because of deep POV.

Learning about Deep POV was a game-changer for me. I always wondered why my editor was always on to me when I used ‘felt,’ ‘saw,’ etc. I didn’t understand. I’d read books written this way plenty of times, but this way of writing has only become popular in the last thirty years or so. Then I read this article, explaining what Deep POV was all about. It was then that something clicked for me. When I brought it up with my editor, they told me they’d been trying to tell me this for a year. I laughed. Sometimes you have to read it from a complete unknown source to finally understand.

Hopefully this has enlightened you too.

Here are some other posts that may be of interest to you:

7 Apps All Indie Authors Need To Write A Novel

How To Write A Book Outline

How To Find And Work Successfully With Beta Readers

How Do Authors Get Paid?

Learn from My Lesson and Use a Book Outline!